Whilst my business partner, Zoran Veljkovic, was having fun shooting a feature in India I stepped in and filled his boots by covering for him on a six part chat show with Sir Michael Parkinson. This was right up my street as I’m a bit of a foodie and the programmes all featured top chefs; Heston Blumenthal, James Martin, Tom Kerridge, Mary Berry, Angela Hartnett and Jason Atherton. Technically, it was a bit of a challenge as it was shot on location, rather than in a studio and had two areas to shoot in which were seperated by a sheet of glass with windows running all down one side. Our schedule allowed 20 minutes to change over from one set to the other and we could not pre-rig as we could see the other set through the glass. The glass, of course, also acted as a mirror so any lights were almost instantly reflected unless they were set absolutely precisely. We shot on 3 C300s, 1 was on steadicam and the others were either tripod or handheld depending on which side of the glass we were on. 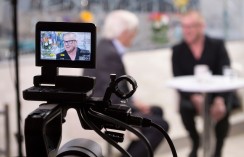 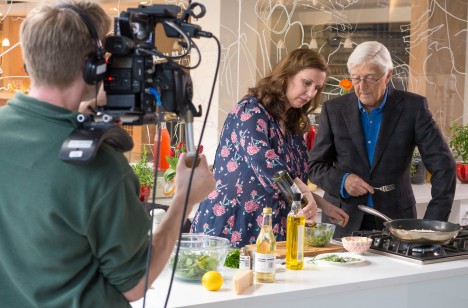 Lighting wise I kept it simple. Just shot HMI’s in from each side and filled and back lit with 1×1 light panels. This was quick to move around and easy-ish to hide from the reflections. Sir Michael and the production team at Parkinson Productions were a dream to work with and luckily everything went swimmingly well – I even picked up some top cooking tips.