I saw it written the other day but is it true? It got me thinking which is dangerous. Back in the day filters were a given on any film shoot. I remember it feeling risky to shoot tungsten stock outside, with no correction filter, so that we could squeeze the last light out of the day. Nd’s and colour correction managed basic exposure needs, ND’s to keep your stop down, colour correction to balance stocks etc but with digital cameras being so prominent now, this can mostly be done electronically or with built in filter wheels. So, have we just got out of the habit of using camera filters in day-to-day shooting? The ‘old school’ comment that started all this was on a Facebook forum where someone asked how to change a cinelog setting to 6500 Kelvin instead of the preset 5500 Kelvin – don’t glaze over this is the last time I’m going into engineer territory – promise. People responded with ways of tweaking the colour matrix, or building luts to load into your monitors and applying these in post and then some one said “you can also go old school and use filters”

I found myself surprised that this hadn’t occurred to me either, at one time it would have been my first point of call. A really simple solution. So now I’m finding myself on a journey of reminding myself of all the filters I used to enjoy. In this post I’m going to look at why the old ‘I’ll sort it in post’ dialogue  – which to be fair I have been heard to say – is not always the best idea, then where the idea of old school harks from and what other DoPs have done with filters. There’s a great example of colour filter use from Killing Eve – from an earlier season but still pretty contemporary. There will be a partner post coming out, when the COVID 19 lock-down finishes, where I will share some tests that I am doing at Formatt Hitech filters in Wales. They have been making filters for longer than I have been alive – yes that is possible – and I’m going to test some of their newest and oldest to see what can be achieved in-camera. 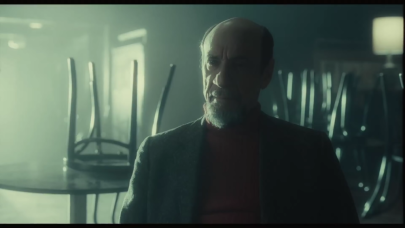 The film is set in the early 60s. A diffusion filter was applied to create its look

Robert Richardson is known for his strong pools of light. In this case diffused with a diffusion filter

Diffusion was used to create a dream like effect

Heavy diffusion was used here. You can see the blooming of the light from the back window

It is true that with care on the shoot there is a lot you can do in the grade but this assumes that there is time and budget for you to make the changes? There is a certain irony that on the larger drama shoots, where there is budget for a good grade, there are always a grand selection of camera filters but on lower budget shoots, where grades are often highly compromised, camera filters are not part of the standard kit. It’s like a double whammy. Also, on quick turnaround shoots a lut is frequently burnt into the rushes and output in that form, so no grade at all. Oddly, the lower the budget the more important it is to have the tools in the kit to do as much as possible in-camera. I had a shoot recently on a short film where budget was very tight. We shot on 1970’s Nikon lenses which – to put it kindly – are unpredictable! These are my lenses and I love them but they are hard to work with. They flare inconsistently, have aberrations that are individual to each focal length and are generally a pain – granted they are a beautiful pain, but still a pain! The directors Theo and Ian from Bousher and Gee who are weird but very wonderful film makers wanted a slight blooming to the highlights. The go to filter for this would be a Supermist but I was understandably nervous about adding these to what are already unpredictable lenses. Another complication was that there were quite a number of effects shots which were digitally enhanced practical effects and I was concerned with how a supermist would fit with the VFX. I knew we wouldn’t have time on set to constantly be pulling filters in and out to match the focal lengths/lighting conditions and so suggested that we should add this ‘blooming’ as a layer in the grade. There is an excellent plug in for Resolve that achieves this look very elegantly.

The Nikon lenses already give a gentle flare from soft back lights. 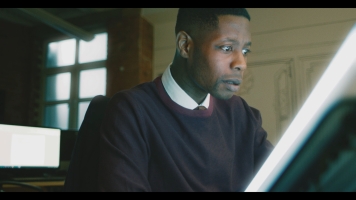 The vertical flare is from the lenses. It is why I was nervous about adding more diffusion without testing thoroughly

This scene was lit with just practical lights.

The meeting room looked great without any diffusion. It’s such a different environment

The soft flare around his face is lovely from these lenses. Added diffusion would have been too much.

Unfortunately we discovered in the grade that the plug in is not widely available and should we want to use it we would need to buy the license. That was not going to happen on this short so we found compromises that worked but were not exactly what I would have added had I used the filters originally. Here is the film if you fancy a gander.

I shot a pop promo shortly after this with the same director duo where we wanted a similar blooming to the highlights and of course, this time, the supermists were part of the essential kit. We are all allowed to make mistakes, just not the same one twice!

Here is the promo, Circa Waves’s ‘Sad Happy’. I really love the combination of under lit, back heavy soft flare and the Supermist blooms. Many thanks to Circa Waves for allowing me to use the stills and show the promo.

Old school obviously refers to a term for something that was traditionally used in the past, but why were filters seen as more important historically? Tim Palmer BSC who shot some episodes of Killing Eve – more on this later – says that he aims to shoot on a ‘one-light’ basis. WHAT, he only uses one light I hear you say? No you fools, it refers to how film rushes used to be viewed. You would print up a 400ft roll of negative for viewing the next day and the lab would set the printer lights (ie – how much light to put through the neg to expose the print) from a colour chart which would be the first shot on the roll. They would only set this once at the start of each 400ft roll and so everything on that roll got the same exposure. This means that if the DoP had underexposed part of the roll it would come out very dark and equally very bright for overexposed parts. The aim was to show the director, as close as possible, what their end film would look like. This gave the director confidence and that trust often allowed the DoP more freedom going forwards. So, by working on a one-light basis you are aiming in-camera to make the rushes look as close as possible to the end look. This would take the form not just of exposure but also all the things normally controlled by filters – ie colour balance, diffusion, darkness of skies and colour shifts. I watched ‘The Dualists’ recently which was Ridley Scotts first film (DoP Frank Tidy) and the use of filters was very prominent. Of course, Ridley and indeed his brother Tony, were very much from the commercials world where filters were used with wild abandon at every possible opportunity. Still it was refreshing to see such a dominant look committed to at the time of shooting. There was no losing your nerve later and taking it out, or a studio head insisting it wasn’t commercial. The decision had been made and, short of reshooting, was irreversible. 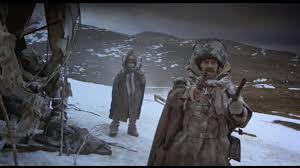 Back to Killing Eve and Tim Palmer BSC. He was talking on a lockdown webinar about his approach to specific environments in the episodes that he shot from Season 1. It was interesting as he very much used camera filters in conjunction with lighting to achieve the look in-camera. For his sections set in London and Berlin he added a Storm Blue filter which shifts the colour towards cyan. This would be easy to do in post also but on set he then lit the actors with a warmer light (adding ¼ or ½ CTO to the lamps). This took the cyan out of the skin tomes but left the background and shadow areas shifting to the cyan end of the spectrum. As I always bang on about – it’s the relationship of light and colour to each other rather than the quantity of light or strength of colour that is the key. What he added with the filter he selectively took out with light. Not only would this depth separation of colour been really time consuming and difficult to achieve in the grade but it also shows a commitment to a well thought out plan. 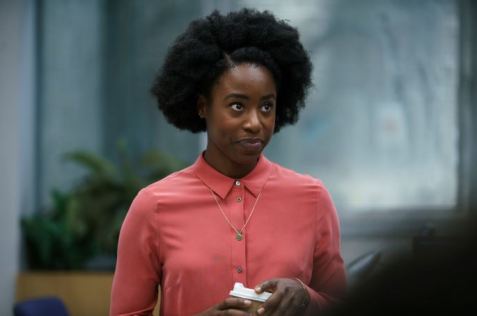 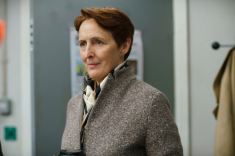 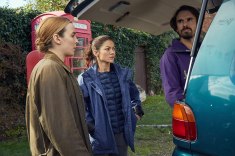 He also used an Antique Suede filter to create a picture postcard seaside look to some of the UK country scenes. He wanted to create an idea of what a tourist might see the British countryside to look like. Again, he lit to push this look further. The Antique Suede filter created a warm base to the picture and then he lit the skin-tones with more warmth, again using ¼ or ½ CTO. It’s this creating of layers of colour tones that the mix of lighting and filters can achieve, in my opinion, more elegantly than just the grade can.

Tune in for the next part to this where I will explore this at the Formatt Hitech filters base in a more practical set of tests.